History of the cathedral

Home / History of the cathedral 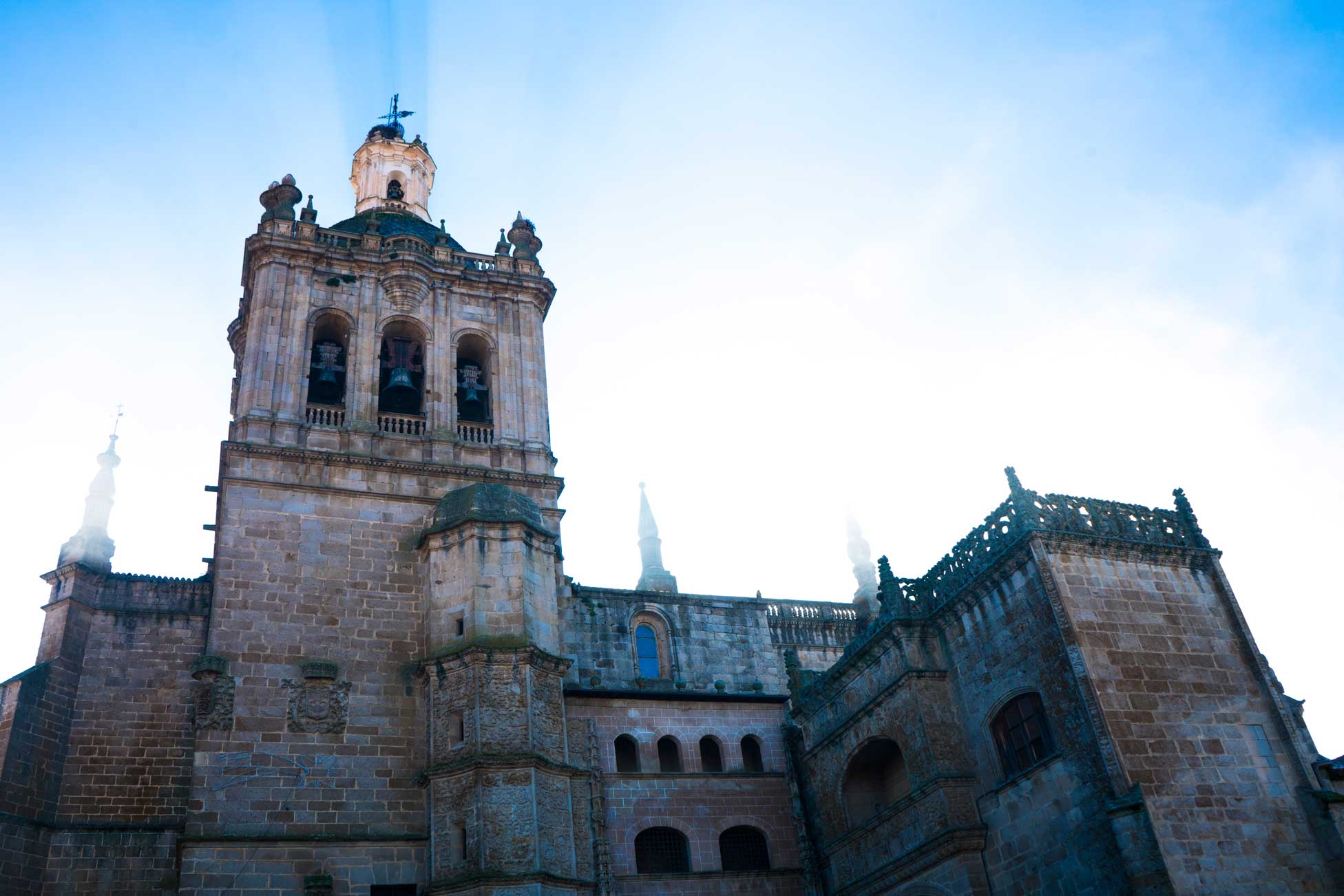 The Cathedral of Coria is dedicated to the Assumption and shares the honour of being the most important place of worship in the Coria-Cáceres dioceses with the Co-Cathedral Santa María de Cáceres. The Catedral de la Asunción de Coria (“Cathedral of the Assumption of Coria”) is a building erected between the Fifteenth and Eighteenth Centuries which replaced an earlier church; of this previous structure only the Fifteenth Century cloister remains with its pointed arch openings, in which the doorposts used to show beams made out of small columns. However, the church today is a magnificent temple which brings together the late Gothic and the Renaissance with Baroque touches.

Construction on the place of worship we see today started in 1496 under Bishop Pedro Ximénez de Préxamo. It started out as a church with a large and solitary nave covered with starred rib vaults, so typical of the Sixteenth Century’s decadent Gothic architecture. The Cathedral of Coria has two thresholds. That of the northern wall is late Gothic with pointed archivolts flanked by flamboyant Gothic pinnacles and is the work of Martín de Solórzano.

The southern door (Puerta del Perdón or “Door of Forgiveness”) is Plateresque. It has two entrances with a basket-handle arch framed by Renaissance columns and, above this, there are several triangular gables with relief depictions of the Annunciation and the Birth, the Adoration of the Shepherds, the Epiphany, St Peter and St Paul, etc. Above the door stands a large, pointed-arch window with typical Renaissance structure and decoration. The creator of this façade was Pedro de Ybarra. 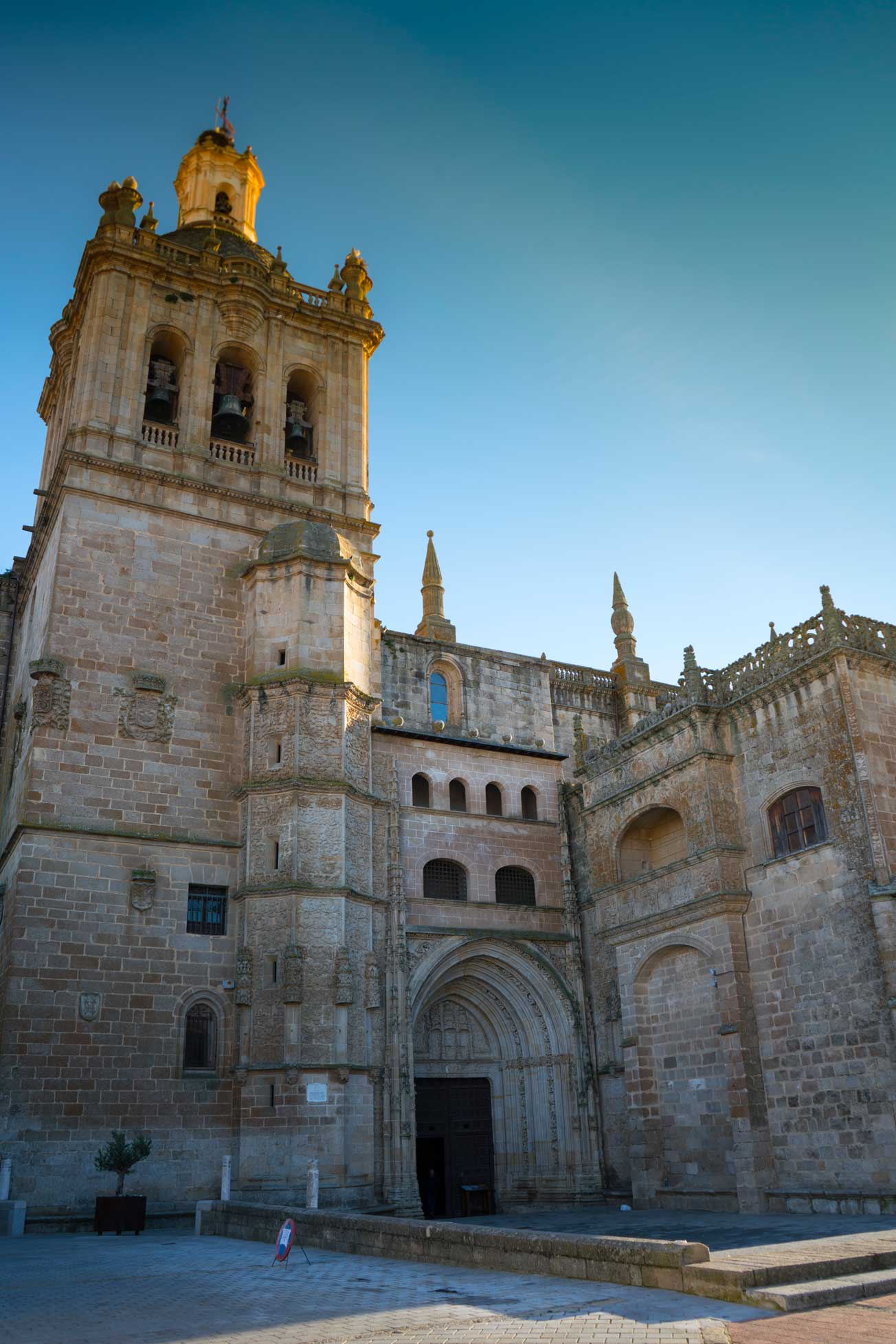 The first reports of the Cathedral are of a late-Romanesque or proto-Gothic structure on the land now occupied by the present building; only the geometric mosaic flooring remains, buried in what is today the cloister’s south passage. We know that, after the building was turned into a mosque and after the re-conquering of Coria by (Christian) Alfonso VII, the diocese was restored to the Bishop Íñigo Navarrón.

This building was replaced by a Romanesque cathedral, probably similar to the Catedral Vieja de Plasencia (Plasencia’s “Old Cathedral”) or that of Salamanca. Several corbels belonging to the Romanesque structure remain. On top of this structure is a Mudéjar cloister (“Mudéjares” being the Muslims who continued to practise their religion and customs in Christian Spain as the Reconquest advanced) built during the Fourteenth Century, which was replaced by the current Gothic one halfway through the Fifteenth Century.

Towards the end of the Fifteenth Century, the Bishop Pedro Ximénez de Préxamo decided to knock down the Romanesque church and build a new one because of the size constraints of the original. The approved outline was the one presented by Bartolomé de Pelayos in 1502. This design, although later modified, was the essential one which would give form to the new cathedral.

The largest part of the complex was finished in the Sixteenth Century although a range of structural reforms would be needed during the following century owing to problems with the construction and foundations. The church has a single hall divided into five star-ribbed vaulted sections. In Spain this style is shared only with the cathedrals in Gerona and Ciudad Real. It has a very small crossing with two arms in which there are two doorways, one at the north leading into the Cathedral square and one at the south, leading into the garden. The main doorway is at the foot of the Cathedral. Two large windows open off each section, except in the main chapel, where there is a single window above the Epístola wall (“the wall of the Epistle”).

Each section is enclosed by external buttresses which works together with the small size of the windows to gives the building a solid look. The entire perimeter is finished off with pinnacles and a balustrade added in the Eighteenth Century, which could be walked along until the roof restoration carried out halfway through the Twentieth Century. The tower is built into the head of the cathedral. The current version replaced an older tower at the opposite end which was knocked down. 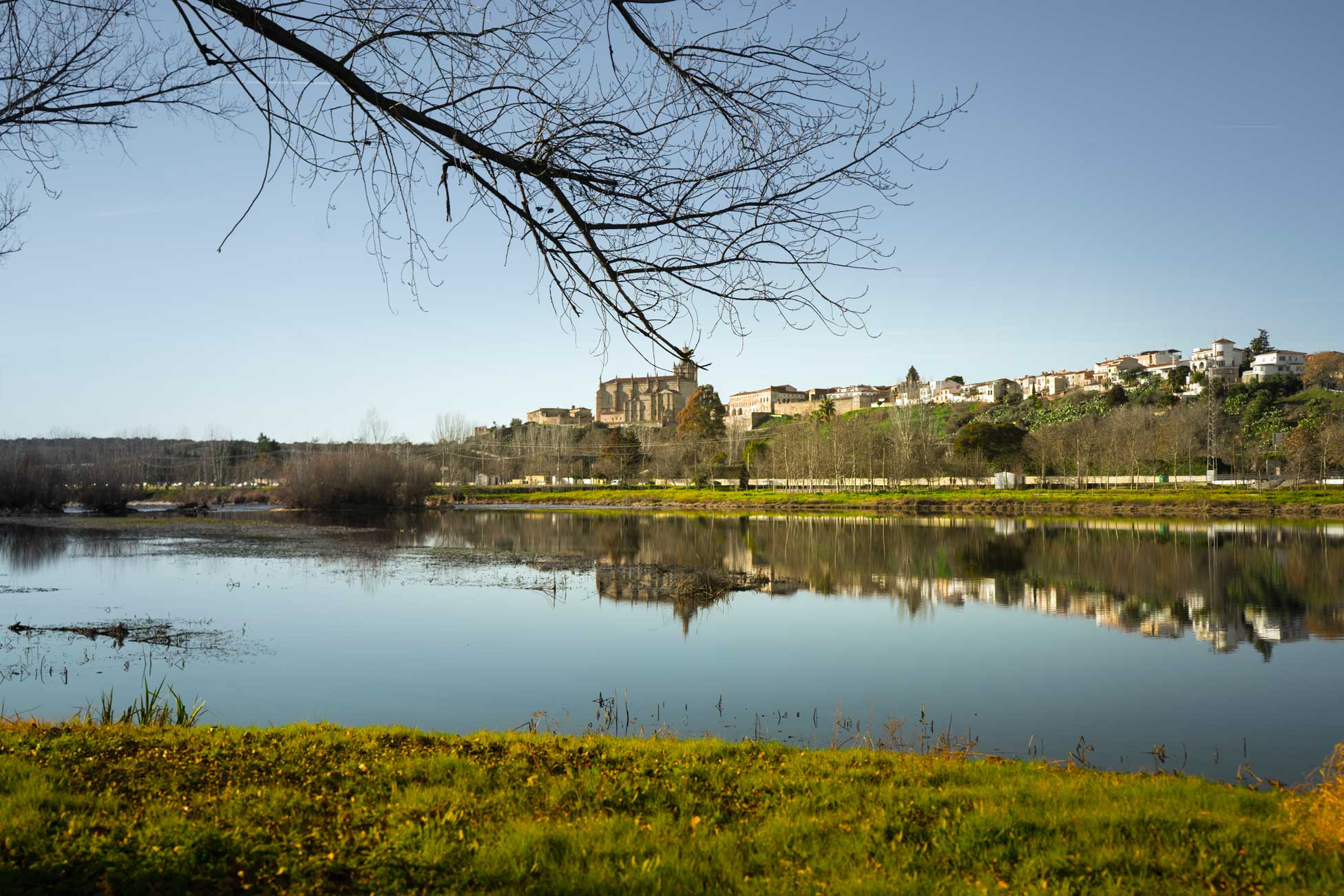