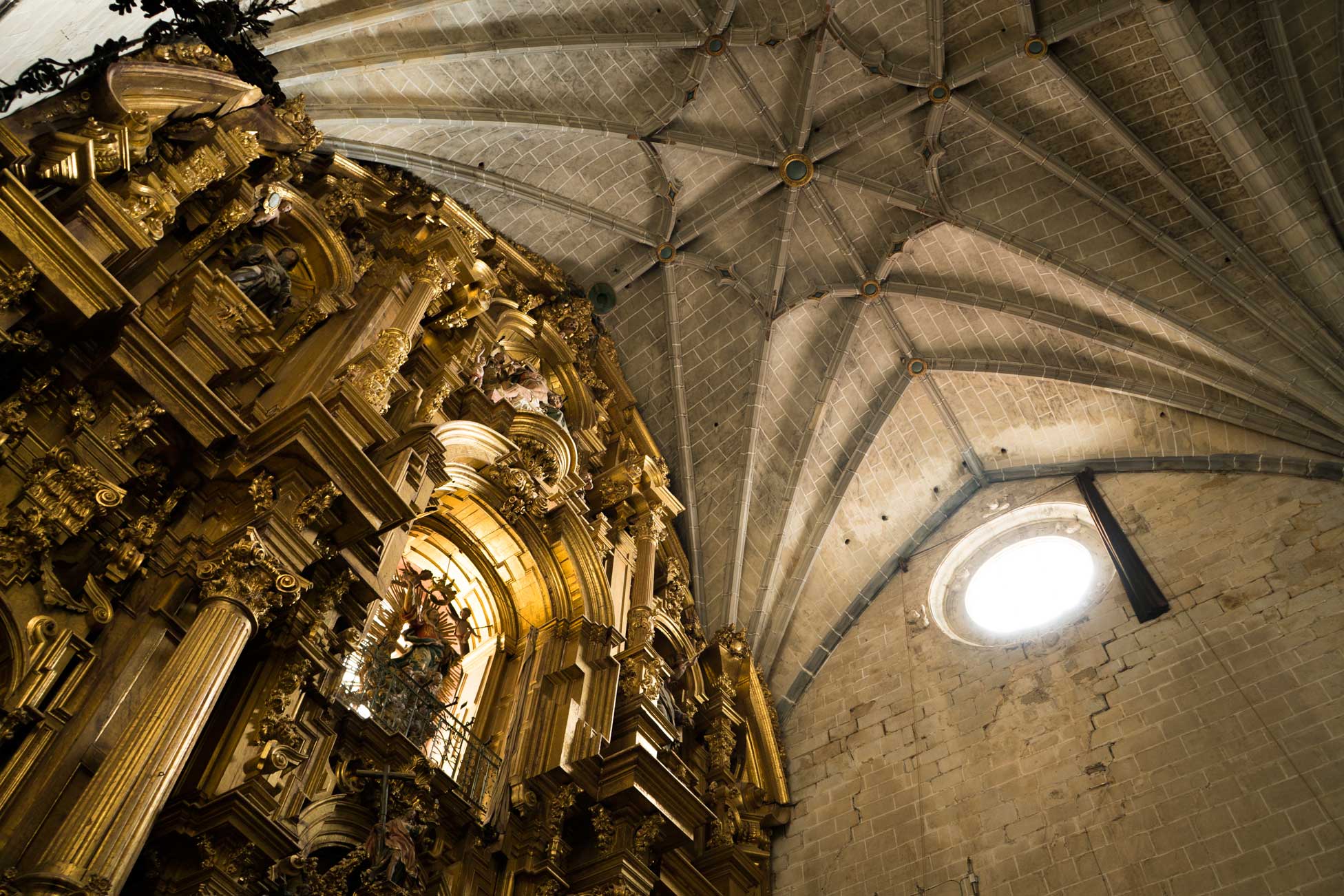 The main chapel occupies the hall’s first section and has a square floor design of 17m each side. The apse wall is entirely covered by the enormous main altarpiece created in 1747 to substitute an earlier one, most likely from the Sixteenth Century. The creators were Friar José de la Santísima Trinidad and Friar Juan de San Félix, Trinitarian friars from Hervás monastery. It is structured in three walkways, two levels and one attic.

The iconography is framed around Bishop José Francisco Magdaleno’s devotions, as it was he who commissioned the work. In the walkway lying on the visitor’s left are San José and San Francisco de Paula, the Bishop’s patronymics. In that on the right-hand-side, we can see San Pedro de Alcántara and Santa Teresa de Jesús, patron of the city and advocate of prelates’ baptism. In the central one, we find the altar frame of the Blessed Sacrament surrounded by the four evangelists and highlighted by the allegory of triumphant Faith. Above this we find the altarpiece’s main niche, occupied by the Assumption of Mary. The piece is crowned by the group of the Quinta Angustia (“the Fifth Sorrow of Mary”) with the Virgin holding the dead Christ at the feet of the Cross. Above this is the benefactor’s shield. All the sculptures were made in the same year as the altarpiece by Alejandro Carnicero and coloured by Eugenio Piti. 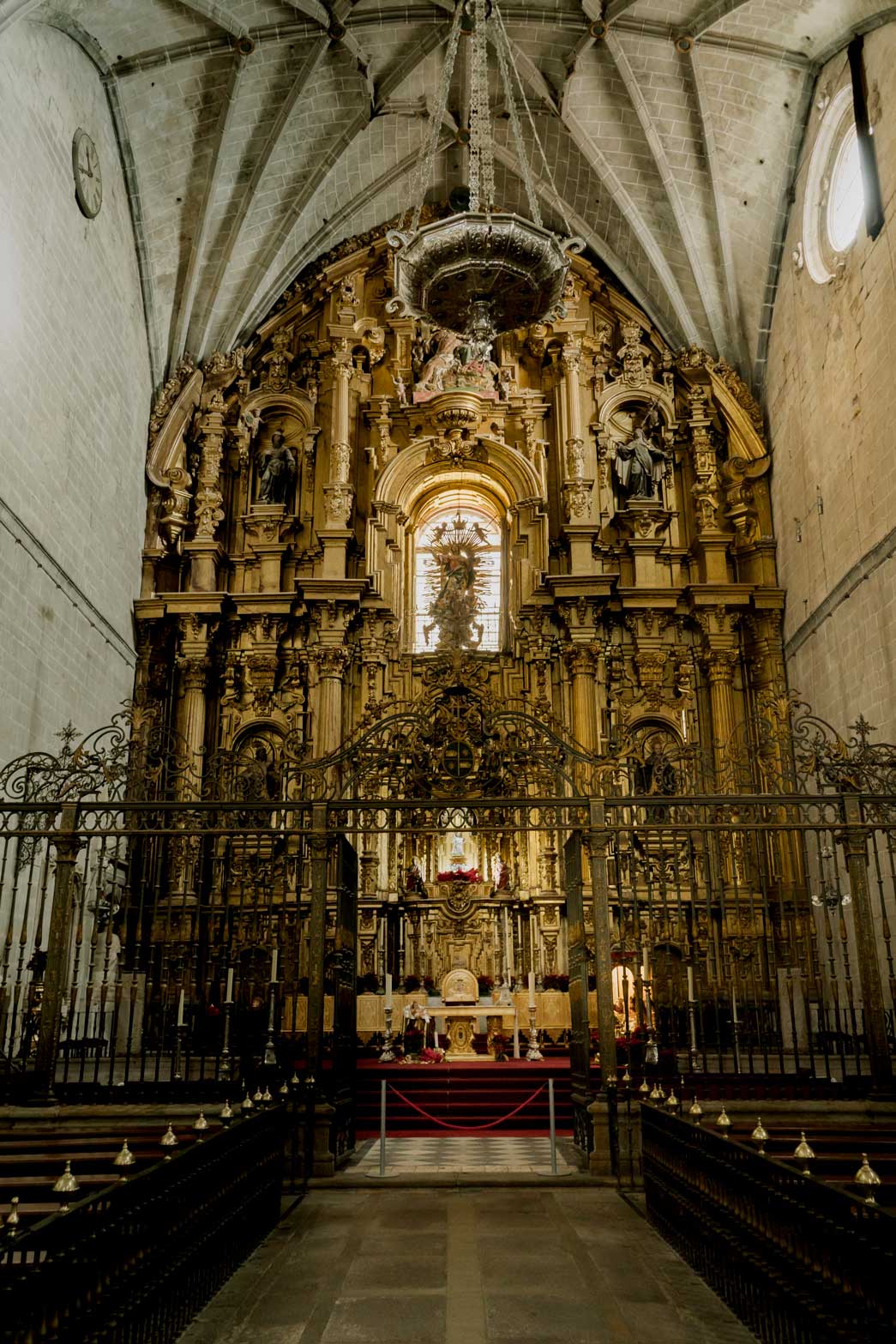 In the main chapel we also find the sepulchres of Bishops Pedro Ximénez de Préxamo and Pedro García de Galarza, statues of figures in prayer. The first, in a Gothic-inspired style, features a double archway finished off with an ogee arch. The original project showed the bishop kneeling in one of the arches and a tabernacle in the other. Today only the bishop’s figure at prayer remains, displayed in the niche opposite his original placement. The figure shows the bishop in his old age, dressed to deliver mass in a bejewelled Mitre. The ensemble is Copín de Holanda’s work; he was sculptor to the Reyes Católicos (Ferdinand and Isabella) and undertook this work because of the Bishop’s great friendship with Cardinal Cisneros.

Bishop Galarza’s sepulchre is a fully-fledged Renaissance work. Designed by architect Juan Bravo and sculptor Lucas Mitata, it is made up of a rounded archway crowned by a split gable. The arch, framed by two grooved pillars, houses the statue of the bishop in prayer in front of an opulently-decorated lectern on which a book and the bishop’s Mitre both rest. The statue’s strength is notable, especially compared to the fragility of his companion, the statue described above. This sepulchre was made in 1596 and was originally closed off with a fence, of which only a fragment remains in the wooden frieze.

The main chapel also houses two stands shaped like eagles from the Sixteenth Century, and the authorities’ bench, above the Evangelio wall, from the Seventeenth Century. Two silver lamps hang from the walls; they were made in the same era as the altarpiece and hang from two moths forged out of iron and gold, made by Cayetano Polo and finished off with several peacocks. Alongside the lamps are four paintings of impressive quality. Archangel Gabriel and the Virgin with the Child (both displaying mannerist traits) above the Gospel and Christ Crucified and Crucified with San Francisco and Santa Rosa (both of these clearly Baroque) above the Epistolary. A Renaissance grill closes the main chapel, renovated in the Eighteenth century. 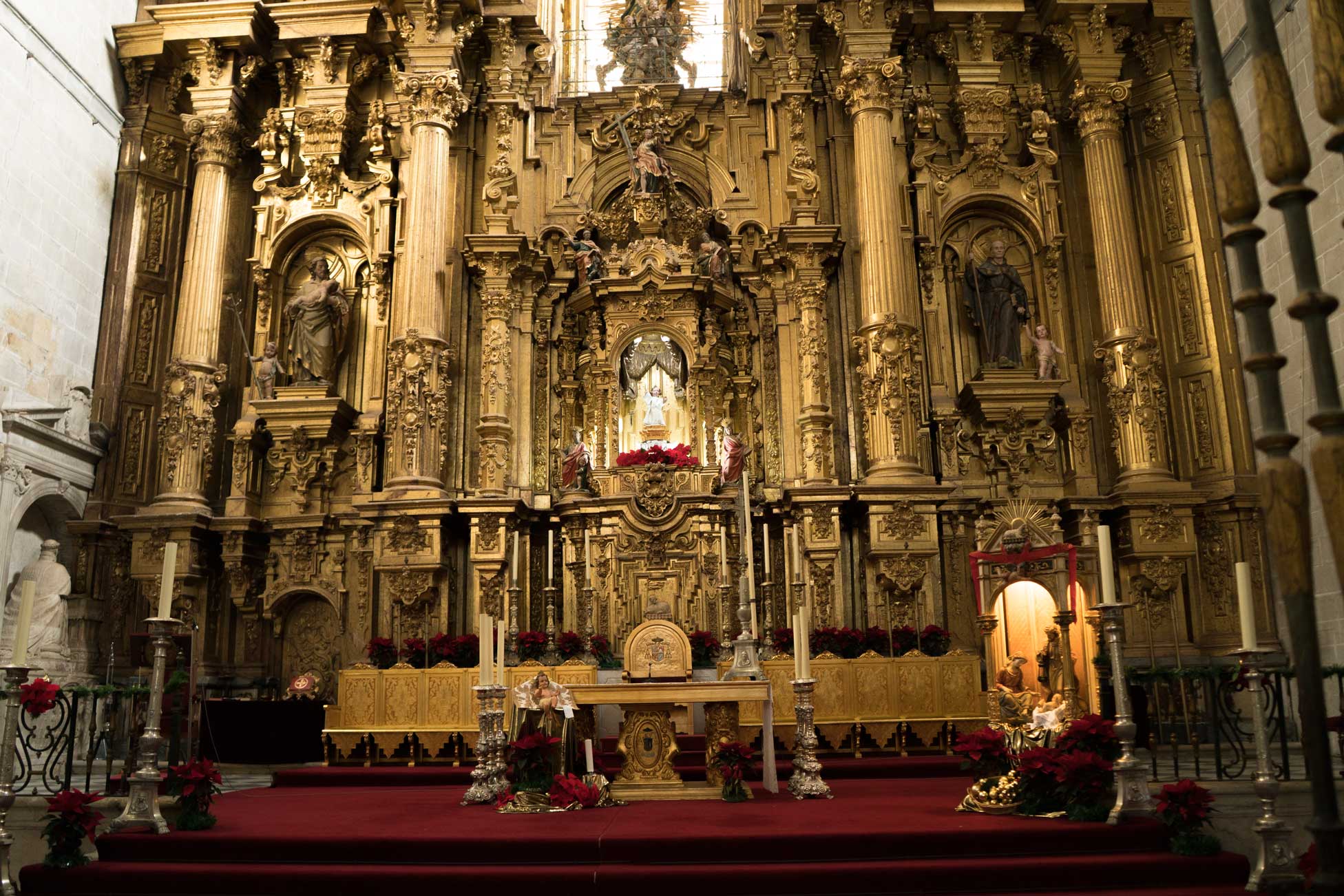 The Chapel of the Immaculate One

Situated at the foot of the square tower, it is one of the oldest chapels in the cathedral. It originally belonged to the Maldonado family and their coat of arms can still be seen on the outer wall, which was the family’s personal pantheon. It already existed in the Romanesque cathedral. Notwithstanding, how it looks today is very different from the original.

In the side walls we can see two Neoplateresque plaster altarpieces made by the Picazo brothers in 1880. The one of the left holds a sculpture of San Francisco de Borja as a statement against earthquakes (most likely bought after the 1755 Lisbon earthquake, which affected the cathedral) and the one on the right houses a Sagrado Corazón de Jesús (“Sacred Heart of Jesus”) which was probably made towards the end of the Nineteenth Century.

The Chapel of Beatified Spínola

This occupies the southern arm of the cross, below the Órgano Chico (“Little Organ”). It was traditionally called the “Capilla de la Anunciación” (or “Chapel of the Annunciation”) but after Marcelo Spínola’s 1922 beatification the dedication was changed. The architecture is simple: a barrel vault with transverse arches like all the rooms in the Cathedral’s southern wing. It houses two altarpieces which face each other. The one on the right is Eighteenth Century Rococo and contains a painting of the Annunciation by de José de Mera. Additionally, in the predela there is a panel with an Ecce Homo between the Virgin and San Juan (Saint John) all made with Flemish traits in the Sixteenth Century. The left altarpiece is dedicated to Beatified Spínola.

This was a personal construction project of Canon Hernando de Amusco, undertaken before the construction of the new cathedral (when it was built, the chapel would be integrated into the design). It is in the southern wall. Originally it must have had Gothic workmanship judging by the pointed archway which remains the access point and the splendid gothic grill with square section bars which closes it. The general deterioration of the building during the Seventeenth Century forced it to be renovated, getting rid of certain architectural elements such as its original vault and choir rostrum. Today we see a rectangular floor plan with a barrel vault and transverse arches.

The altarpiece which we can still see today was built after these works: it is a Baroque piece including two square windows and an oculus in the attic to illuminate the chapel. The predela below the altar shows various saints in relief with a single niche between Solomonic columns. It holds an image of San Pedro de Alcántara made by Bernardo Pérez de Robles in 1676. On top of the wall on the right a small archway opens out into a tiny chapel with a Baroque shell altarpiece which includes a complete and very interesting Calvary. A crucifix made by Lucas Mitata in the Sixteenth Century presides over it accompanied by a St John the Evangelist and a Mary Magdalene (both made in the Seventeenth Century) and an Our Lady of Sorrows from the Eighteenth Century. 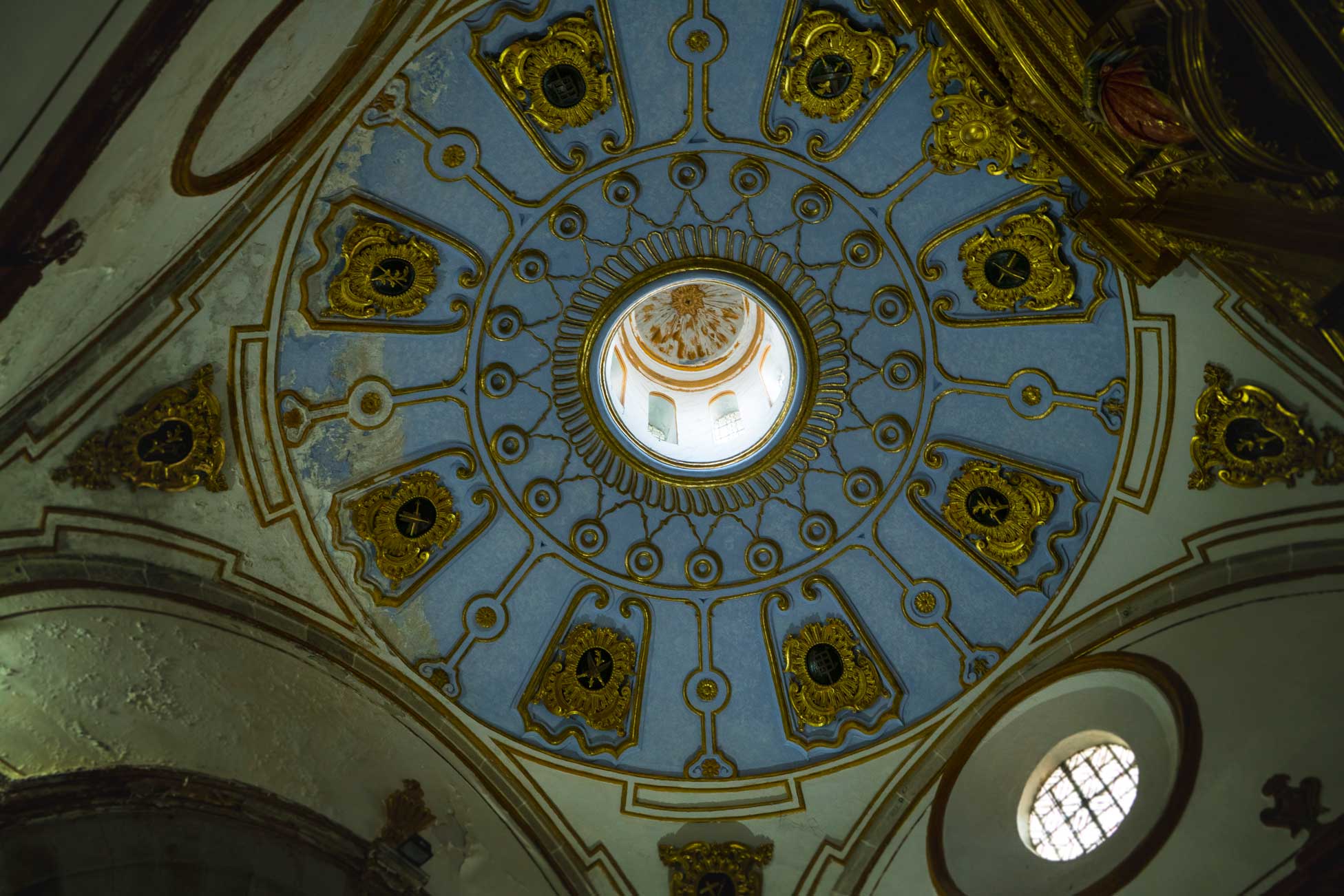 Situated at the foot of the cathedral, for many centuries it was the Cathedral Chapter’s preferred space and they met there often. Its appearance today is due to a complete refurbishment carried out in 1783. The dome is set on golden pedentives with signs carrying the symbols of the Passion of Christ. It communicated with the nave through a great rounded arch closed off with a lavish Eighteenth Century grill. It houses three altarpieces. The biggest is intended as a large cupboard to hold the cathedral’s collection of relics. It is organised into three walkways and an attic, with this last presided over by an image of San Joaquín.

On each side wall is a twin altarpiece, one of which was dismantled to install the Mudéjar arch which connects the chapel with the cloister. In that which remains today we can see an image of San Sebastián made by José Salvador Carmona in 1777, accompanied by San Antonio de Padua and San Vicente Ferrer (both of these more roughly-made). Before the other altarpiece was dismantled, they used to be faced by San Pedro de Verona (commissioned by the chapel) accompanied by San Francisco and Santo Domingo de Guzmán, who are today in the museum. 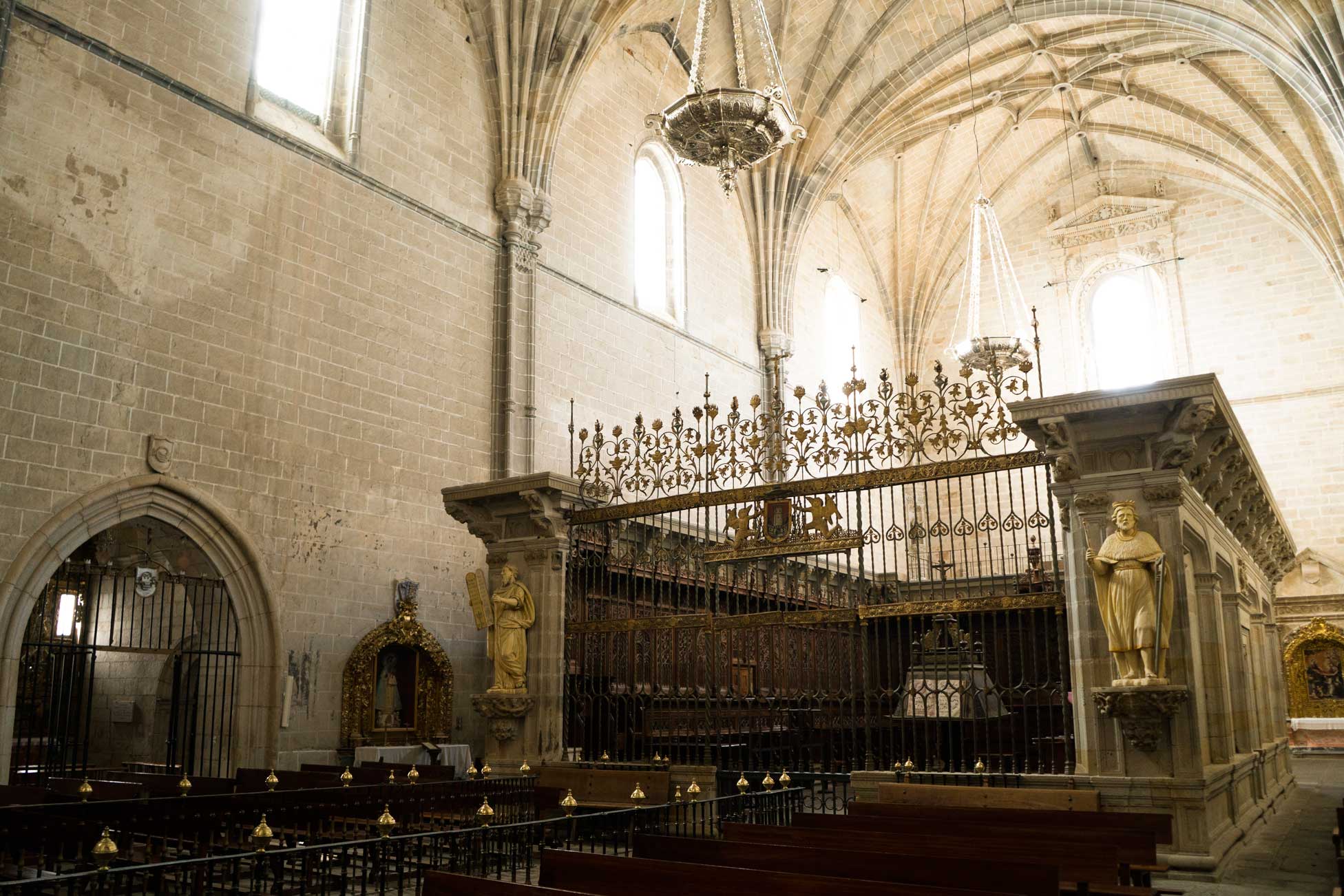 The choral masonry is a beautiful Gothic collection built in two phases. It is made up of 71 chairs (43 high and 28 low) and a bench made of walnut wood. The furniture comes in part from the old Romanesque cathedral built in 1489 shortly before the current construction started. We know that it takes up the whole central nave of the old building. The original work now corresponds to the frontal and the sides. The collection was completed by the wood carver Martín de Ayala when the building’s construction finished in 1514. In 1560, cresting with little statues of saints was added, all made by Francisco Pérez. 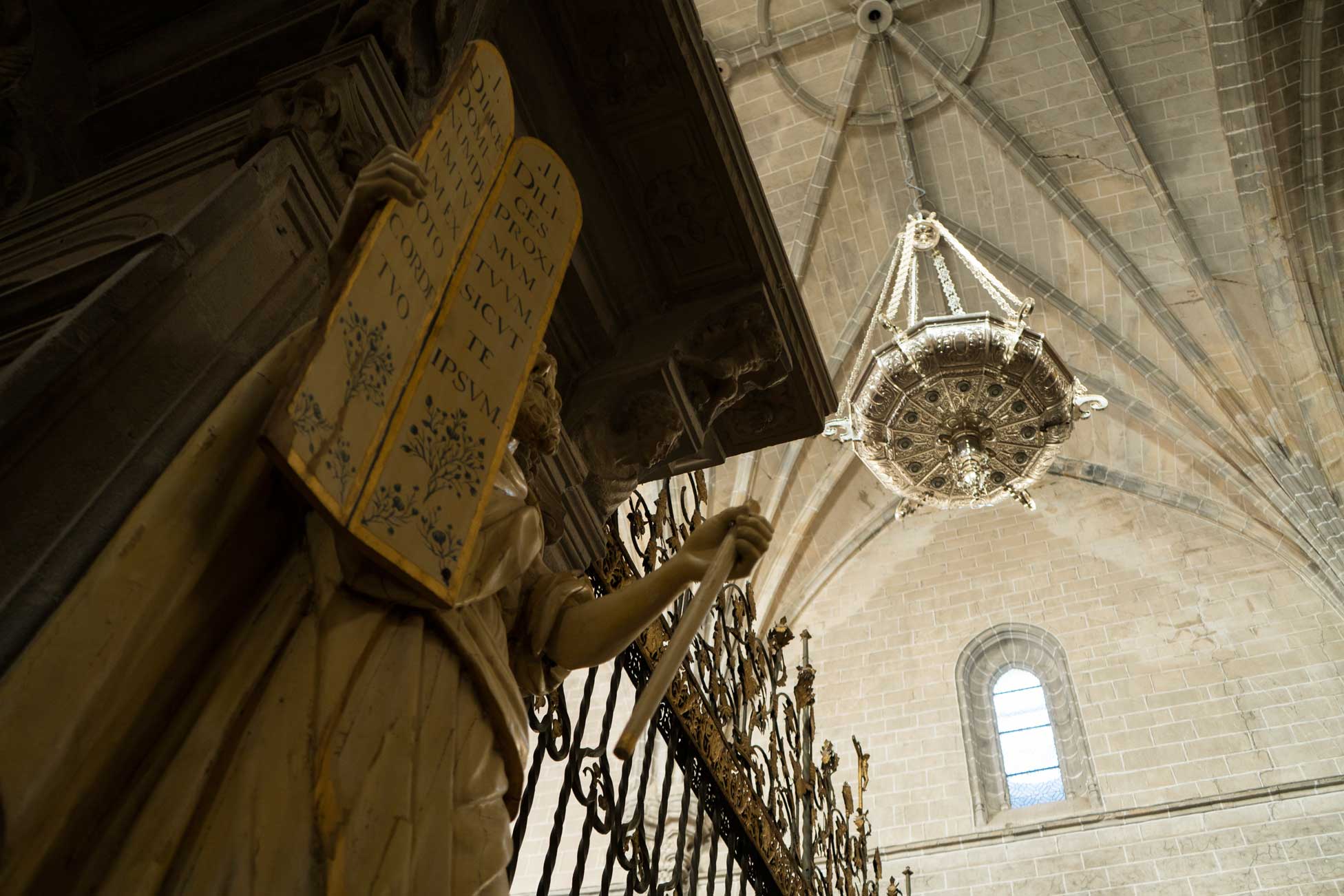 The Episcopal chair sits at the centre of the front section, accompanied by the dean’s seat (featuring the inscription which dates the work) and that of the Superintendent. It is decorated with a standing Saviour holding up the world with one hand and blessing with the other. It is covered by a Gothic canopy. The decorations on each of the chairs – both the old ones and the additional Ayala ones with geometric Mudéjar cloths – are each one unique. The finishing touch on the collection is provided by two seats of honour for the Dukes of Alba, Lords of the city, which are placed at the same elevated height as that of the bishop. In the centre of the collection we find a Baroque lectern.

The wall which closes off the choir is a Renaissance work by Pedro de Ybarra in 1561, which he worked on throughout the first half of the Sixteenth Century and which was funded by the dean Gaspar de Bardales. The grill which closes it off is a magnificent piece made by the master Hugo de Ras and decorated with the shield of the Bishop Juan Ortega Bravo de Laguna in the central part. Framing the grill we find two corbels decorated with cupids and the Cathedral Chapter’s shield. Originally they served as a kneeler for the Dukes of Alba (their chairs are placed behind these) until the decision was taken in the Eighteenth Century to replace them with sculptures of Moses and David.

The wall faces two small doors with lintels crowned off by the Chapter shield. The retrochoir features a podium for musicians, below which a small Baroque altarpiece with the Virgen del Rosario stands. It is flanked by four stone statues of San Pedro, San Pablo, San Andrés and Santiago el Mayor all in corbels and below small canopies. Above the altarpiece sits the shield of dean Bardales, who funded the work. 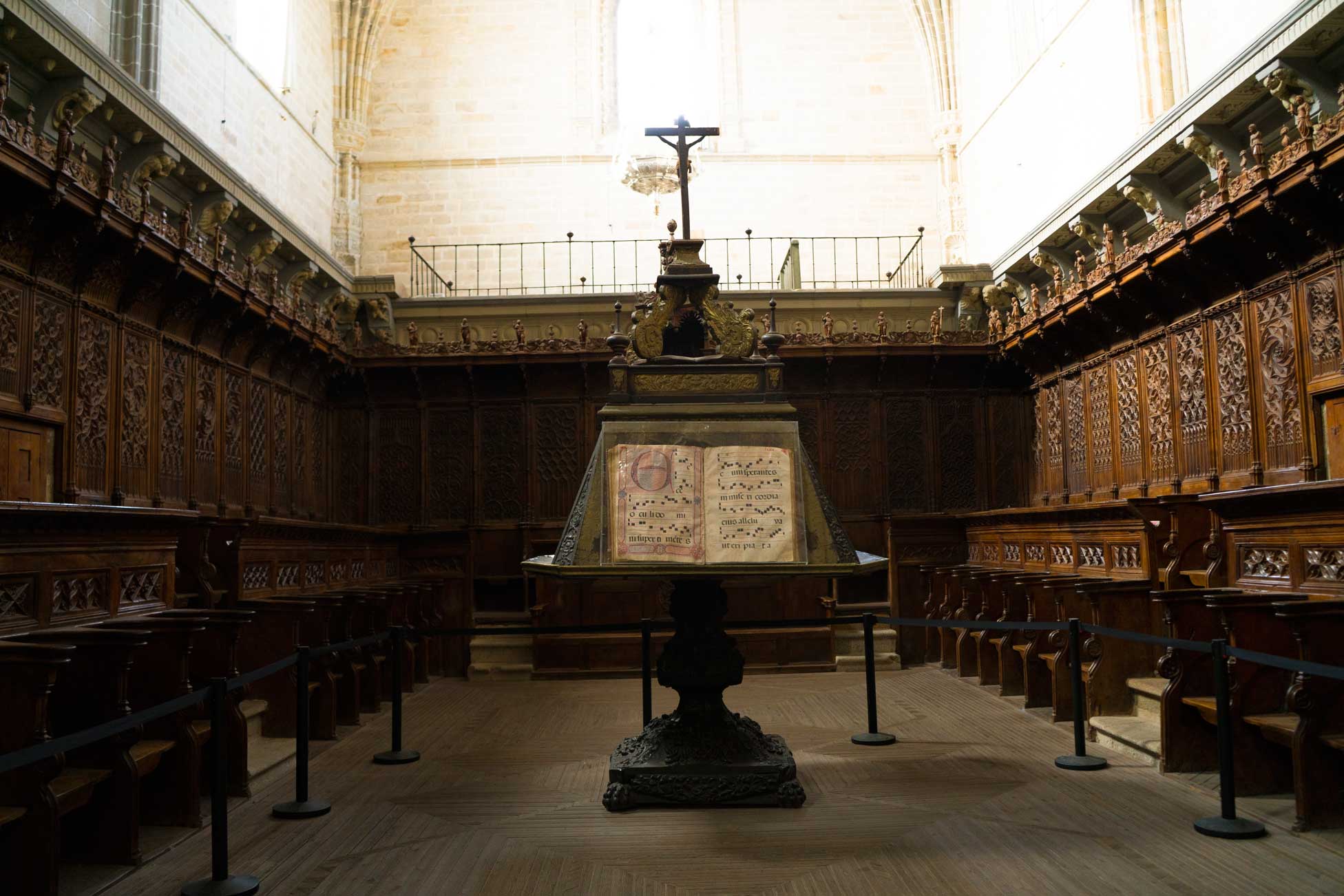 The cathedral complex has two sacristies: the one known as “the canon’s sacristy” or “the main sacristy” and the “benefactors’ sacristy” or “smaller sacristy”. Both were built in the Seventeenth Century, which was a turbulent time in the construction process since the Cathedral Chapter had to meet the funding needs at the same time as trying to strengthen all the Sixteenth Century work, which had many structural issues. The rooms which have survived until today show very discreet workmanship at odds with the church’s excesses. Perhaps the challenges faced at the time forced the Chapter to choose more thrifty options.

The main sacristy is an almost-square space with a chequered floor in granite and slate. It contains a Baroque drawer unit which occupies one of the room’s sidewalls. Gold crest-work and gratings hold an Eighteenth Century Neoclassical crucifix above this. The walls are decorated with a variety of paintings, including depictions of Our Lady of the Rosary and Saint Thomas Aquinas.

The Cathedral has two monumental organs, each placed at a gallery in the nave’s second section, which is the place of worship’s crosspoint. 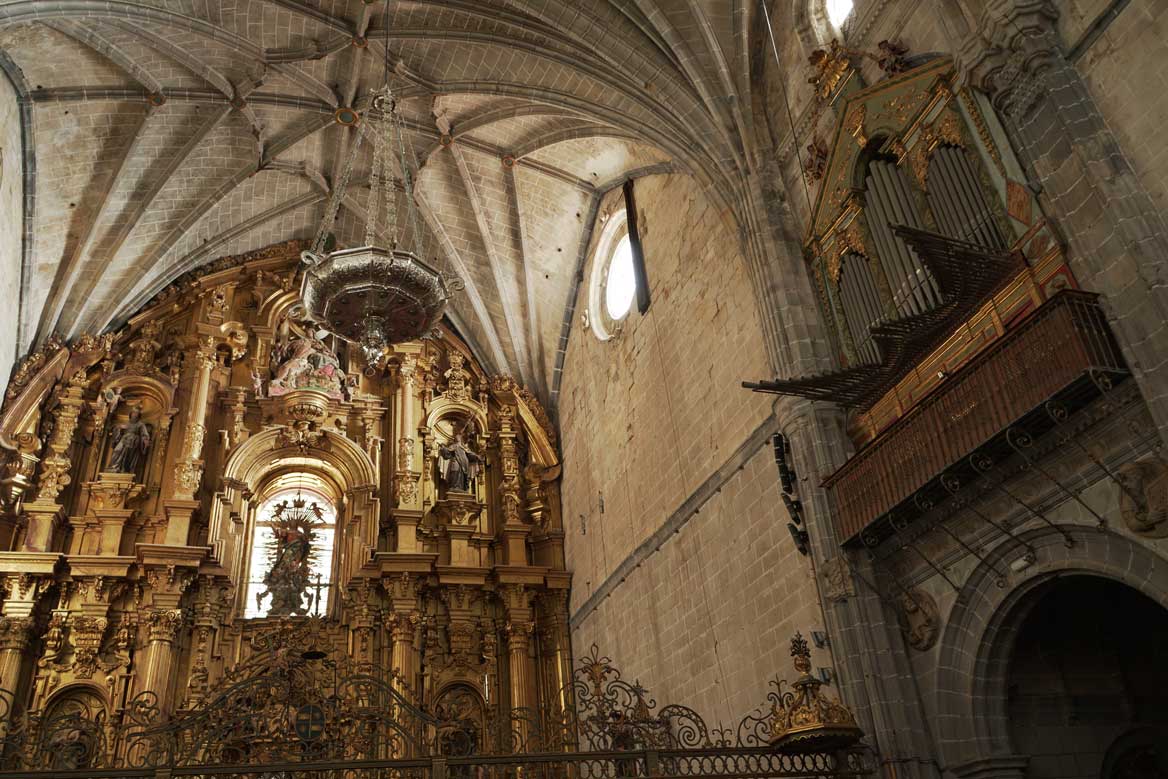